Flutter 3 – Everything About Latest Features and Updates 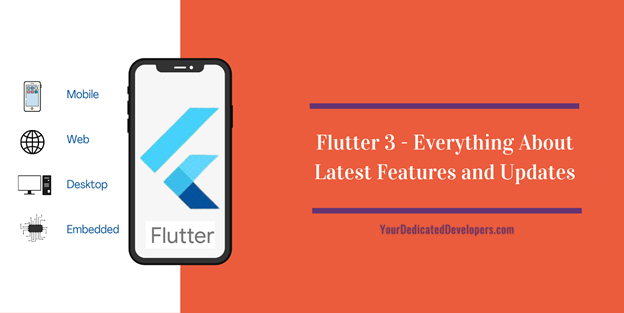 Google announced Flutter 3.0 at the yearly Google I/O 2022 conference, with several new features and improvements. Google has given a treat to Flutter developers with stable support for both macOS and Linux. Flutter is an open-source, cross-platform UI development framework that has become a programmer-friendly toolkit to build multi-platform applications.

Google created Flutter to make a cross-platform software framework. The best thing about Flutter is that it can be used to build applications for iOS, Android, Windows, Linux, macOS, and even for the web, and all from the same shared codebase. Well, that is not all. Flutter 3.0, feature list has more in store. Let’s take a look into what’s new in Flutter 3 to discover all the important elements of Flutter’s stable release.

Google’s Firebase is an app development platform that helps you build apps and games. The goal of firebase is to make app development and maintenance process easier, with features like detailed crash reporting, user analytics, authentication, and storage. According to Google, 63% of Flutter developers use firebase in their apps, and the Google team has been trying to integrate Firebase and Flutter as a result.After the release of Flutter 3.0, the integration is now better than ever, with improved tooling, documentation, and new widgets such as FlutterFire UI and the updated Crashlytics plugin. FlutterFire provides developers a reusable UI whereas Crashlytics provides developers the ability to track fatal errors across users in real-time.

For most mobile app developers, Flutter is all about the web and app framework. But there’s also a growing community around casual game development, which is taking advantage of Flutter. Over the past year, thousands of Flutter games have been published because Flutter is simple to learn and easy to use for building UIs and casual games.

This time, the Flutter team has focussed more on casual gamers by sharing a casual game toolkit which is a suite of templates, guidelines, and tutorials for game developers who want to invest their skills in a Flutter. Now, game developers can also take a tour of the flame game engine to get insights into how Flutter works with games.

Back when Google released Flutter, it received a good amount of appreciation from the developers’ community. After starting with Android and iOS app support, the framework can also officially be used to build apps for Windows, macOS, Linux and embedded devices. Flutter 3 has become one of the most significant milestones in the journey of Flutter. It is because Flutter 3.0 supports all six platforms on the stable channel officially.

It is one of the top highlights of Flutter 3 and is a much-needed update on Material Widgets. Material 3 Widget enables developers to welcome “Material You” for their Android applications. The new updates of Material include color system improvements, typography improvements, and many other components.

The Material 3 widgets in Flutter were introduced with features including

With Flutter’s new lifecycle API, you can receive the flexibility to have control over the bootstrap process from the hosting HTML page. And it also helps Lighthouse to examine the performance of a Flutter app. Now, developers can leverage the desktop support for their Flutter app.

The future of Flutter seems bright and promising for building web and mobile applications. You cannot find a more appropriate technology than Flutter if you want to serve a worldwide audience across multiple platforms. We would recommend always  hire professional mobile app developers to carry out the job.

The Good and The Bad of Angular Development

No ThanksWe Use CookiesThis website uses cookies to improve your experience. By continuing without changing your cookie settings, we assume you agree to this. Read more...